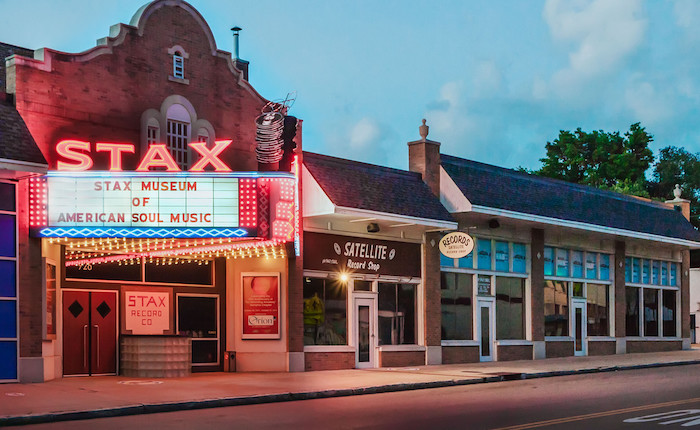 FEBRUARY 28, 2020, MEMPHIS – The Stax Museum of American Soul Music announced today that it has been voted among the winners in a recent USA Today 10Best Readers’ Choice Award contest for Best Music Museum in the United States and Canada. The contest launched in January with national voting lasting four weeks. Participants were allowed to vote once daily throughout the contest.

The Stax Museum took the number two spot out of 20 nominees for Best Music Museum and Nashville’s Patsy Cline Museum garnered the number one spot.

A panel of relevant experts, which included a combination of editors from USA TODAY, editors from 10Best.com, relevant expert contributors, and sources for both these media and other Gannett properties chose the nominees for Best Music Museum. Other nominees in the contest included the Rock & Roll Hall of Fame in Cleveland, Country Music Hall of Fame in Nashville, the Los Angeles and Mississippi GRAMMY Museums, the Johnny Cash Museum in Nashville, and the Motown Museum in Detroit.

“We’re very honored to have been nominated among such great company in this contest,” says Stax Museum spokesman Tim Sampson. “And we are very excited to have ranked in the number two spot with other larger, more well-known museums in the running. While we do consider ourselves an international tourist attraction, we are also a community-based museum tasked with preserving and promoting the legacy of Stax Records through more than 40 free programs each year in addition to our permanent collection of unique exhibits and vast collection of memorabilia. It’s very gratifying to know how loyal our fans are. We hope this award further heightens awareness of the great music and culture that came out of Stax Records in the 1960s and 70s.

“We have a lot of friends and colleagues at other museums that were nominated in the contest and we congratulate all of them on being chosen as well,” Sampson said. “We offer a special congratulations to our friends at the Memphis Rock ‘n’ Soul Museum, the only other music museum in Memphis that was nominated.”

The announcement was made today by USA Today and 10Best.

Located at the original site of Stax Records in Memphis, the Stax Museum of  American Soul Music is an entity of the Soulsville Foundation, which also operates the Stax Music Academy and The Soulsville Charter School. Opened in May 2003, it has also been named TIME magazine’s “Most Authentic American Experience in Tennessee” and was voted by USA Today readers in 2015 as one of the Ten Best Musical Attractions in the World.