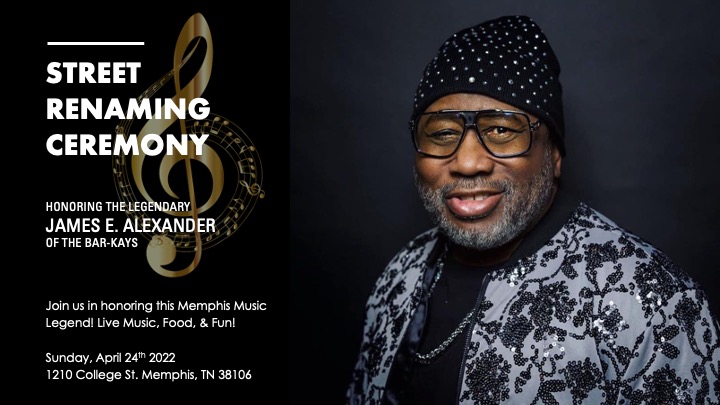 Deep in the heart of the South Memphis neighborhood known as Soulsville USA sits a historic artery know as Stafford Avenue, located between College Street and Fountain Court just one block from the former home of Stax Records, where the Stax Museum of American Soul Music stands today.

In a special ceremony on Sunday, April 24, 2022 at 3 p.m. with live music, food, speakers, special guests, and more surprises, Stafford Avenue will be renamed for Stax legend and iconic funk bassist James Alexander, whose childhood home was at 898 Stafford. Alexander is the founder and only living member of the original Bar-Kays, Otis Redding’s backing touring band and pioneers in funk. The new moniker will change the name from Stafford Avenue to “James E. Alexander Avenue.”

Memphis City Councilman JB Smiley, who sponsored the street renaming resolution, said, “Mr. Alexander has blazed a trail worth following and opened doors for many. He is a fine example of what it means to be a Memphian.”

Alexander was the original bassist for the Bar-Kays when four of the six band members were killed in the same December 10, 1967 plane crash that claimed the life of singer Otis Redding. Alexander was the only Bar-Kays member not aboard that flight, which was carrying Redding, five of the Bar-Kays, the pilot, and Redding’s road manager. Because the plane could accommodate only a certain number of people, Alexander boarded a commercial flight to Milwaukee, Wisconsin, with plans to join the group for their next gig in Madison. After the plane crashed in the icy waters of Lake Monona just a few miles from the Madison airport, Alexander had the task of identifying the bodies of his bandmates, as well as that of Redding. He was 17 years old.

Trumpeter Ben Cauley, the only Bar-Kays member aboard the flight who couldn’t swim, was the sole survivor of the crash.

Formed in 1966 initially as an instrumental group, The Bar-Kays had their first smash hit in 1967 with “Soul Finger,” which peaked at number 3 on the U.S. Billboard R&B singles chart and number 17 on the Billboard Hot 100. It was after the success of the song that Redding chose The Bar-Kays as his touring band.

After the crash, Alexander and Cauley worked to reform the band, with the addition of lead singer Larry Dodson, formerly of The Temprees. Cauley left the group in 1971 and went on to perform with the likes of B.B. King, Levon Helm, Keith Richards, Boz Scaggs and numerous others until his death in 2015.

Subsequent work after the crash for Alexander included playing bass on the Academy Award-winning “Theme From Shaft,” which Isaac Hayes wrote and recorded in 1971 for the feature film Shaft. Alexander and The Bar-Kays also performed at the famed Wattstax concert festival in Los Angeles in 1972, which celebrates its 50th anniversary this year.

Today, Alexander and the reformed Bar-Kays have been performing their unique style of funk for more than 60 years, during which time they have released more than 20 albums and some 50 singles. They remain a sought-after touring group. They were inducted into the Memphis Music Hall of Fame in 2013 and the National

Rhythm and Blues Music Hall of Fame in 2015. Alexander is the father of famed hip hop and R&B producer and artist, Phalon “Jazze Pha” Alexander, who has worked with many music artists such as Ciara, T.I., Field Mob, Too Short, Slick Rick, Ludacris, and OutKast, among many others.

“I am absolutely in awe about the renaming of the street I grew up on, Stafford Avenue, to James E. Alexander Avenue,” Alexander said. “Words can’t even express what I’m feeling right now about this kind of recognition. I think it’s just amazing to receive this accolade.”

The street renaming ceremony, which is free and open to the public, will be held at 3 pm on the grounds of the New Zion Missionary Baptist Church at 1210 College Street, Memphis, TN 38106 and will feature live music, food, speakers, celebrity appearances, and more.