Soundwave’s Tim Wakefield has created an original artwork based on Huey Lewis and The News’ audio recording of his 1985 classic “The Power of Love.” The song was featured in the film Back to the Future that same year. It reached number one on the Billboard Hot 100 singles chart and was nominated for the Academy Award for Best Original Song.

Soundwaves has produced a limited-edition collection of four original artworks and 50 prints that are individually numbered and signed by Wakefield and Lewis. Sales will benefit the Stax Music Academy, which was forced to close its physical facility in March and move to virtual learning due to the COVID-19 pandemic. Former Stax Records owner Al Bell introduced the Soundwaves Art Foundation to Stax Music Academy earlier in the year.

The autographed prints and originals went on sale September 8, 2020. The originals are $2,500 each and prints are $450 each. Earlier in 2020, Elvis Costello teamed with Soundwaves for artwork inspired by his classic 1983 hit “Pump It Up,” and raised approximately $16,000 for the Stax Music Academy.

“When I visited the Stax Museum dedicated to Stax Records and found out that they had a school there teaching that music today at the original site of the label’s studios,” Lewis said, “it was a bit of a spiritual experience. Those students were so talented and so hopeful that I knew I had to do something to support them. I’m happy for this opportunity to continue helping them out.” 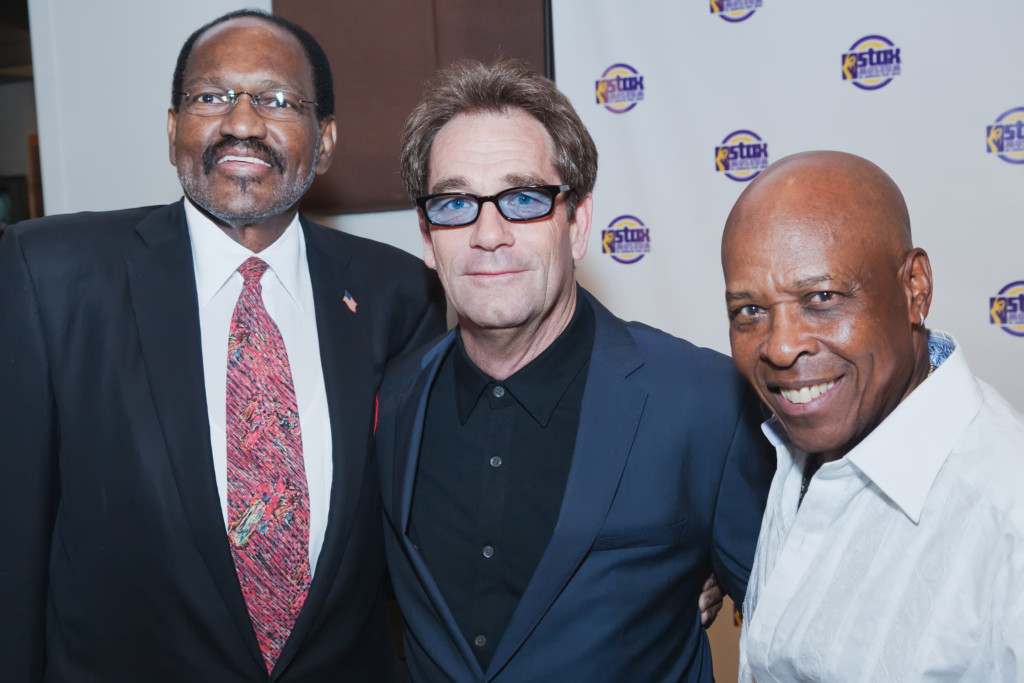 Huey Lewis with Al Bell (left) and David Porter (right) at the Stax Museum in 2010.

Soundwaves, which was founded by Wakefield and his son Tom in 2007, has raised some $2.8 million for nonprofit organizations around the world, creating original artworks based on songs by the world’s top musical artists from Pearl Jam and Paul McCartney to Fleetwood Mac and Lin-Manuel Miranda.

For more information about Soundwaves and to purchase originals and prints, please visit https://soundwavesartfoundation.com/band/huey-lewis/