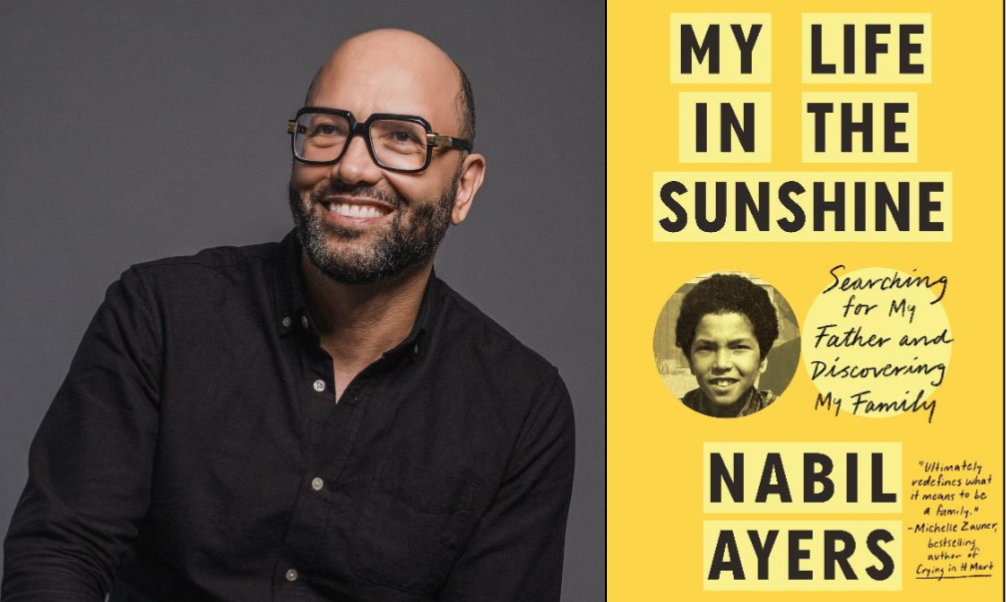 My Life in the Sunshine: Searching for My Father and Discovering My Family

Throughout his adult life, whether he was opening a Seattle record store in the ’90s or touring the world as the only non-white band member in alternative rock bands, Nabil Ayers felt the shadow and legacy of his father’s musical genius, and his race, everywhere.

In 1971, a white, Jewish former ballerina chose to have a child with the famous Black jazz, funk, and soul musician Roy Ayers, fully expecting and agreeing that he wouldn’t be involved in the child’s life. In this highly original memoir, their son, Nabil Ayers, recounts a life spent living with the aftermath of that decision, and his journey to build an identity of his own despite, and in spite of, his father’s absence.

Roy’s influence is strong, showing itself in Nabil’s instinctual love of music, and later, in the music industry. By turns hopeful–wanting to connect with the man who passed down his genetic predisposition for musical talent—and frustrated with Roy’s continued emotional distance, Nabil struggles with how much DNA can define a family… and a person. Undeterred by his father’s absence, Nabil, through sheer will and a drive to understand his roots, redraws the lines that define family and race.

As part of the Stax Museum’s 20th Anniversary throughout 2023, in addition to many special events, we will host an event every month that is free and open to the public and our community. This is one of our events for February. 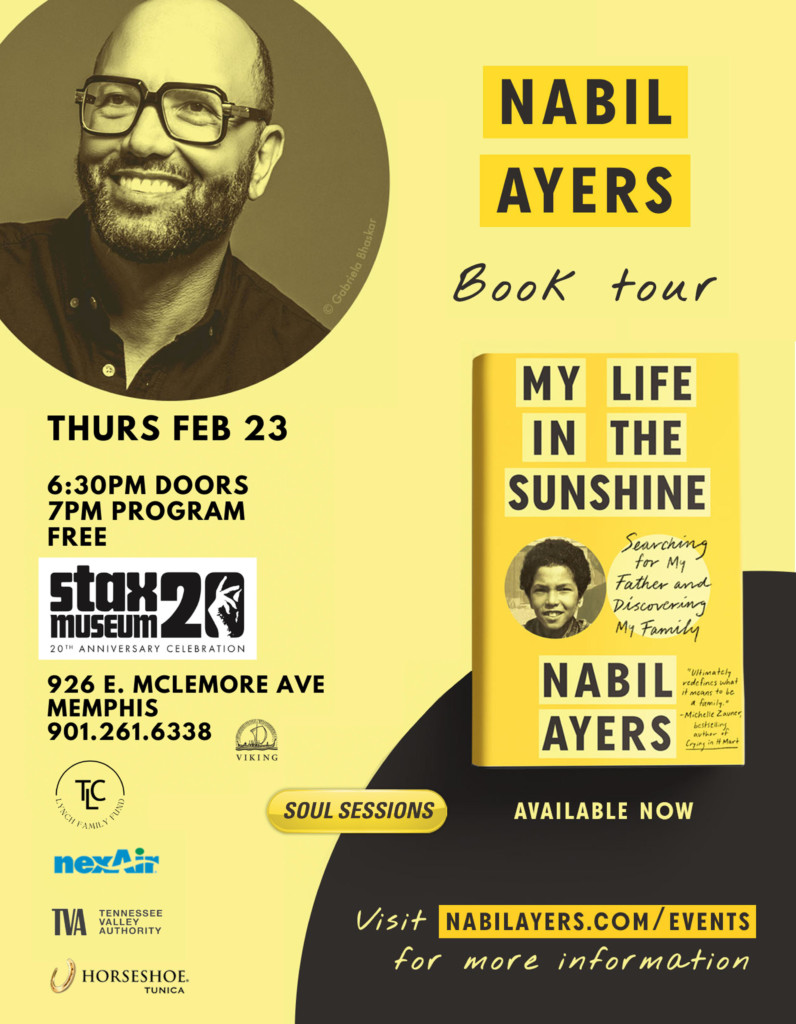 After touring across the U.S. and into Europe last year and offering a keynote address at the South by Southwest festival in Austin, Ayers will embark on a lecture tour-meets-personal pilgrimage to Southern locations of historical and musical significance of his personal, unexplored ancestral past. He will be lecturing at universities around topics including family, race, music, business, and more, including at the Alpha chapter of the fraternity he pledged and became president of during his own university experience, which just happens to have been founded in the deep south by confederate soldiers. Ayers will also hold talks and have conversations at record stores and even the Stax Museum in Memphis, which celebrates landmark musical history. Finally, and most importantly, he will also meet up with members of the Ayers family (some descendents of slaves, the others of slave holders), who until recently he didn’t know existed.

Among the hosts for Ayers’ appearances are The Forward’s Teresa Stoval and Grammy-nominated musician Allison Russell.

The new dates include:

In this timeless and relatable story, Nabil uncovers the pain of rejection, the joy of inclusion, and how to redraw the lines that define race and family. Throughout his adult life, whether he was opening a Seattle record store in the ’90s or touring the world as the only non-white member in alternative rock bands, Nabil felt the shadow and legacy of his father’s musical genius, and his race, everywhere.

In 1971, a white, Jewish, former ballerina, chose to have a child with the famous Black jazz musician Roy Ayers, fully expecting and agreeing that he would not be involved in the child’s life. In My Life in the Sunshine, their son, Nabil Ayers, recounts a life spent living with the aftermath of that decision, and his journey to build an identity of his own despite and in spite of his father’s absence. Indeed, the title of the book is an homage to the opening lyric from his father’s classic 1976 song, “Everybody Loves the Sunshine.”

Since the book’s publication, Nabil has learned more about his extended family than ever before, including the existence of two-half sisters he’d never met. He’s also connected with his father’s first manager and some of his former band members, adding new chapters to this already fascinating story.

Like Roy, Nabil became deeply involved in the music world, first as a musician, and currently as the recently named U.S. president of the London-based Beggars Group label family. He has worked closely with The National, Grimes, St. Vincent, Pixies and Big Thief. He was in the crowd at Seattle’s OK Hotel the night Nirvana played “Smells Like Teen Spirit” for the first time in 1991. He co-founded Seattle’s beloved Sonic Boom Records stores in 1997, launched his own indie label The Control Group in 2002, and has toured the world playing drums with artists such as The Replacements’ Tommy Stinson and The Long Winters.

Nabil also sits on the board of directors for iconic Seattle radio station KEXP and the Recording Academy’s New York chapter, and has written about music, race, the space where the two intersect and many other topics for the New York Times, NPR, GQ, The Root, Rolling Stone, Pitchfork, Vulture and more.

“Across a soundscape of ’70s New York jazz, ’90s Pacific Northwest grunge and ’00s indie rock, Nabil traces the image of his father through song. With growing fascination and heartbreak, he draws out meaning from the shadow of absence, and ultimately redefines what it means to be a family.” — Michelle Zauner, New York Times-bestselling author of Crying in H Mart and Grammy-nominated musician Japanese Breakfast

“Riveting and relatable, heartbreaking and at times hysterical — Ayers’ rhythmic prose is lyrical, propulsive, spellbinding. I couldn’t put My Life in the Sunshine down till the end. I already know this is a book I’ll be returning to, again and again.” — Allison Russell, Grammy-nominated musician and songwriter

“My Life in the Sunshine is too fun to be as poignant as it is. The book reads like music. As another mixed-race Jewish kid who has shaped his life around music, I had a lot of ways into this memoir. This story is for anybody who has ever tried to find the missing puzzle pieces in their own life.” — Daveed Diggs, musician and actor

ACCLAIM FOR MY LIFE IN THE SUNSHINE:
“So goes Nabil’s beautiful, musical memoir about what it means to be a son, how much DNA versus in-person parenting shapes a loved one (nature vs. nurture), how music unites, and what extended family like half-siblings found later in life can truly teach us.” – Good Morning America

“An entertaining journey through the eras of music that punctuate Ayers’ life.” – Entertainment Weekly

“In many ways, the opportunity to recount his journey to success in the music industry—both in spite of and because of his father—feels like a reclamation of his story.” – Variety

“My Life in the Sunshine documents Ayers’s efforts to explore his family history, and the unexpected paths that search led him down — making for a moving and complex portrait of inheritances and bonds.” – InsideHook

“As a memoir, Ayers’ book has a little of a lot of things, with incredible stories about the grunge scene, about touring in just-scraping-by bands, about race, about family, about finding meaning in relationships and growing up around (and in the shadow of) fame. It’s a stellar book.” – Salt Lake City Weekly

“It’s emotionally hefty, but through Ayers’ writing, one finds that family can mean many, many different things, with an ultimately uplifting message of discovery.” – The Pitch

” The last several chapters of his memoir give a fascinating insight into not just his own life but how fractured family trees can reveal a host of truths about modern America.” – Salt Lake Magazine

“It’s an eminently readable coming-of-age memoir, the story of one man’s life in music and the music business—but that’s just the backdrop to a larger story about family and race and masculinity and nature vs. nurture.” – Willamette Week

“The Must-Read Book of the Summer” – Hits Daily Double

“You can find the heat in Roy Ayers’ “Everybody Loves the Sunshine” anytime. But for an emotional respite, this memoir is even sunnier.” – Jazz Times

“Within these passages, and in tandem with his story of self, Ayers gives the reader a reflection of the times, frequently acting as a historian and ethnomusicologist. While captivating in their detail, these moments explode expectations of memoir as a genre and eloquently weave a personal story through space and time.” – Cleveland Review of Books